Prince George's County (often shortened to "PG County") is located in the U.S. state of Maryland, bordering the eastern portion of Washington, D.C. As of the 2010 U.S. Census, the population was 863,420, making it the second-most populous county in Maryland, behind Montgomery County. Its county seat is Upper Marlboro. It is one of the richest African American-majority counties in the United States, with five of its communities identified in a 2015 top ten list.

Prince George's County lies in the Atlantic coastal plain, and its landscape is characterized by gently rolling hills and valleys. Along its western border with Montgomery County, Adelphi, Calverton and West Laurel rise into the piedmont, exceeding 300 feet (91 m) in elevation. 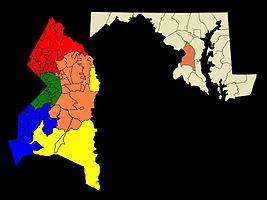 County terrain, culture and demographics differ significantly by location within the county. There are five key regions to Prince George's County: North County, Central County, the Rural Tier, the Inner Beltway, and South County. These regions are not formally defined, however, and the terms used to describe each area can vary greatly.[19] In the broadest terms, the county is generally divided into North County and South County with U.S. Route 50 serving as the dividing line.[20]

Northern Prince George's County includes Laurel, Beltsville, Adelphi, College Park and Greenbelt. This area of the county is anchored by the Capital Beltway and the Baltimore–Washington Parkway. Laurel is experiencing a population boom with the construction of the Inter-County Connector. The key employers in this region are the University of Maryland, Beltsville Agricultural Research Center, and NASA-Goddard Space Flight Center. Areas of geographic distinction include Greenbelt Park, a wooded reserve adjacent to the planned environmental community of Greenbelt, and University Park, a collection of historic homes adjacent to the University of Maryland. Riversdale Mansion, along with the historic homes of Berwyn Heights, Mt. Rainier and Hyattsville, along with Langley Park are also located in this area. The hidden Lake Artemesia, a park constructed during the completion of the Washington Metro Green Line, incorporates a stocked fishing lake and serves as the trail-head for an extensive Anacostia Tributary Trails system that runs along the Anacostia River and its tributaries. The south and central tracts of the Patuxent Wildlife Research Center also lie in this part of the county; the north tract lies north of the Patuxent River in Anne Arundel County.

Central County, located on the eastern outskirts of the Capital Beltway, consists of Mitchellville, Woodmore, Greater Upper Marlboro, Springdale, Largo, and Bowie. According to the 2010 census, it has generally been the fastest growing region of the county.[21] Mitchellville is named for a wealthy African American family, the Mitchells, who owned a large portion of land in this area of the county.[22] Central Avenue, a major exit off the I-95 beltway, running east to west, is one of two main roads in this portion of the county. The other major roadway is Old Crain Highway, which runs north to south along the eastern portion of the county. The Newton White Mansion on the grounds is a popular site for weddings and political events.

Bowie is best known as a planned Levittown.[23] William Levitt built traditional homes, as well as California contemporaries along U.S. Route 50, the key highway to the eastern shore and the state capital of Annapolis. Bowie has currently grown to be the largest city in Prince George's County, with more than 50,000 people. It also has a large Caucasian population, compared to much of the county (48% of the population).[24] Housing styles vary from the most contemporary to century old homes in Bowie's antique district (formerly known as Huntingtown), where the town of Bowie began as a haven for thoroughbred horse racing. Areas of geographic distinction include the Oden Bowie Mansion, Allen Pond, key segments of the Washington, Baltimore and Annapolis Trail, as well as planned parks, lakes and walking trails.

Prince George's rural tier was designated "in the 2002 General Plan as an area where residential growth would be minimal";[25] it may be found in the area well beyond the Beltway to the east and south of central county, bounded on the north by U.S. Route 50, the west by the communities Accokeek and Fort Washington, and the east by the Patuxent River. Prince George's origins are in this part of the county. Most of this area contains the unincorporated parishes, villages and lost towns of Prince George's County. Largely under postal designations of "Upper Marlboro" or "Brandywine", in truth the town of Upper Marlboro is more central county in character, though it is the post office location for various rural settlements. (The names of these unincorporated areas are listed below in the towns section of this article). Since 1721 Upper Marlboro has been the county seat of government, with families that trace their lineage back to Prince George's initial land grants and earliest governing officials. Names like Clagett, Sasscer, King James and Queen Anne pepper the streets.

The rural tier has been the focus of orchestrated efforts by residents and county government to preserve its rural character and environmental integrity.[26][failed verification] Under the Maryland-National Capital Park and Planning Commission (M-NCPPC), Patuxent River Park is the largest natural preserve and provides public access for birdwatching and viewing the rural tier's natural waterfront vistas. In season, the park's Jug Bay Natural Area and the Patuxent Riverkeeper in Queen Anne both offer canoeing and kayaking rentals on the Patuxent. The county's largest collection of tobacco planter mansions and preserved homes are in the rural tier, some managed by the M-NCPPC. Many rural tier roads have scenic highway preservation status; a fall drive yields exceptional beauty along the Patuxent valley's Leeland Road, Croom Road, Clagett's Landing Rd., Mill Branch Rd., Queen Anne Rd., and Brandywine Rd. Walking access along roads in this area is very limited, because most property along the roads remains in private ownership. However, walking is much more accessible in the widespread M-NCPPC lands and trails and state holdings in the Patuxent valley, such as Merkle Wildlife Sanctuary and Rosaryville State Park, both popular among hikers and mountain bikers.[citation needed]

The inner beltway communities of Capitol Heights, District Heights, Forestville, Suitland, and Seat Pleasant border the neighboring District of Columbia's northeastern and southeastern quadrants. This region is the most-densely populated area of the county, although many communities here saw a decrease in population from 2000 to 2010. A high percentage of its residents are African-American.[27]

South county is a blend of the greenery of the rural tier and the new development of central county. The communities of Clinton, Oxon Hill, Temple Hills and Fort Washington are the largest areas of south county. It is the only portion of Prince George's County to enjoy the Potomac River waterfront, and that geographic distinction has yielded the rise of the National Harbor project: a town center and riverside shopping and living development on the Potomac. The National Harbor has become a major tourist and convention attraction, with significant hotel accommodations, eateries and shopping. Water taxi service connects National Harbor to other destinations along the Potomac.[28] Several historic sites, including Jones Point Lighthouse, can be viewed from the harbor front. Piscataway Park in Accokeek preserves many acres of woodland and wetlands along the Potomac River opposite Mount Vernon, Virginia. River Road in Fort Washington also yields great views of the Potomac. Fort Washington Park was a major battery and gives access to the public for tours of the fort, scenic access to the river and other picnic grounds. Oxon Hill Manor offers a working farm and plantation mansion for touring; His Lordship's Kindness is another major historic home. Also, Fort Foote is an old American Civil War fort and tourist destination.

The data relating to real estate for sale on this website appears in part through the BRIGHT Internet Data Exchange program, a voluntary cooperative exchange of property listing data between licensed real estate brokerage firms in which Coldwell Banker Realty participates, and is provided by BRIGHT through a licensing agreement. The information provided by this website is for the personal, non-commercial use of consumers and may not be used for any purpose other than to identify prospective properties consumers may be interested in purchasing. Real estate listings held by brokerage firms other than Coldwell Banker Realty are marked with the IDX icon and detailed information about each listing includes the name of the listing broker.
©2021 BRIGHT, All Rights Reserved. Information Deemed Reliable But Not Guaranteed. Some properties which appear for sale on this website may no longer be available because they are under contract, have Closed or are no longer being offered for sale.
Data last updated: Jan 26, 2021 1:39:pm.